(CNN)Prosecutors have asked a federal judge to sentence Omar Gonzalez, who scaled a White House fence in September, to almost two years in prison.

The reaction from the public and lawyers alike was similar — it feels like a light sentence.

But federal court is generally not the place where you hear about a “slap on the wrist” type of sentence. Quite the opposite — stories about federal sentences resemble mournful dirges about banishment and oblivion.

For example, there’s a formerly convicted felon who got 15 years for possessing shotgun shells. There’s a man with no history of drug dealing who received a 25-year mandatory minimum for selling his prescription pain pills to an undercover informant.

Unlike state and local courts, federal court is the Thunderdome.

The U.S. Sentencing Commission is an independent agency in the judicial branch of government. It establishes sentencing guidelines for federal courts directing the appropriate form and severity of punishment for federal offenders. Sentencing judges, while not bound to apply the guidelines, are required to calculate and consider them when sentencing.

So how does sentencing actually work? In both state and federal courts, the algorithm of sentencing is at its core a function of: one, the gravity of the offense you were just convicted of, and two, your prior criminal record. After that, a broad spectrum of aggravating and mitigating factors can be presented to the court.

While sentencing in federal court is designed to be formulaic, to jaded defense attorneys that formula usually feels like — start at 120 months. Then, add 240 months. Then, tell client to kiss his family goodbye. 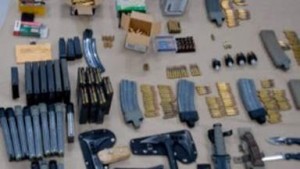 Defense attorneys have long criticized the federal sentencing guidelines as draconian. There’s a reason why so many cases in federal court result in plea agreements — the risk of being convicted at trial and sentenced to the equivalent of a one-way trip to Mars is just too much for most defendants to stomach. The choice to plead guilty or go to trial is often really a Hobson’s choice, i.e., no choice at all.

That’s why everyone — civilians and attorneys alike — probably thought the government’s sentence of Omar Gonzalez seemed light. But if you calculate the prescribed guidelines, the prosecution’s recommendation is actually on the high end.

In a world dominated by oppressive mandatory minimum sentences, it turns out that rushing to the White House with a weapon and laying your hands on federal officials trying to stop you from rushing the White House … is not as serious as other federal crimes.

At least according to the Sentencing Commission and Congress. Now Gonzalez was aided by the fact that he pleaded guilty and accepted responsibility, which can get you a decent reduction at sentencing. But otherwise, the sentencing range for this Army veteran is only 15 to 21 months of imprisonment, and that’s even with Gonzalez’s prior criminal record.

If you think the fence jumper’s sentence is light, don’t blame the U.S. attorneys. They asked for a sentence at the top of the guidelines, which means they asked for the most time within the prescribed range of months.

You could blame Congress for the light sentence and guidelines, but there were certainly enough federal statutes available in this case. The government dropped several of them in exchange for Gonzalez’s plea agreement.

When a federal judge hands out a double-life sentence for mailing 5.2 grams of LSD to a buddy, we don’t bat an eye. In federal court, we’re surprised when a sentence doesn’t eat up at least half of one’s natural life.

Full disclosure: I’m one of those criminal defense attorneys who has had his heart broken by federal sentences handed out to his clients. It makes practicing in federal court a harrowing, sometimes soul-crushing endeavor. Federal court is not for the faint of heart.

Maybe Gonzalez’s sentence was appropriate. Maybe it just feels light because we’re used to all the other seemingly interminable federal sentences. Then again, if Gonzalez’s sentence fails to deter the next White House fence jumper, perhaps it was indeed not harsh enough.

Danny Cevallos and Jeff Wong from Cevallos & Wong LLP have been selected to the 2015 Pennsylvania Super Lawyers list.  No more than five percent of the lawyers in the state are selected by Super Lawyers.

Super Lawyers, part of Thomson Reuters, is a rating service of outstanding lawyers from more than 70 practice areas who have attained a high degree of peer recognition and professional achievement.  The annual selections are made using a patented multiphase process that includes a statewide survey of lawyers, an independent research evaluation of candidates and peer reviews by practice area.  The result is a credible, comprehensive and diverse listing of exceptional attorneys.